The reformation of the Yenidze does not underly a specific fashion trend. Already the foyer with its columns, artistic mosaics and stone cutters crafts prepare the visitor for the prestigious interior. The foyer is decorated entirely in red and grey granite, whose modern ornamentation corresponds harmonically with the oriental architecture of the building.

Purpose of the building

The purpose of the Yenidze was to manufacture Oriental cigarettes. Hugo Ziets, (purveyor to the court of the Saxon king) produced "Salem" and other brands. At the time, there were 1500 workers at the factory and its working conditions as well as its social system was exemplary. Women were sitting in long rows and rolled the butts by hand. The light-flooded halls were well ventilated, dust-free and every floor featured washing facilities. On the upper floor, there were a luxuriously equipped canteen and rest areas with canvas chairs. Whenever the staff wanted, they could relax on the roof terrace during lunch breaks. The brands manufactured at the time were Mogul, Murad, Fatima or, very prosaic, "Dreipunkt" (three-point). Until the 1930s, Dresden represented the heart of the tobacco industry in Germany; 40 factories produced more than 60 percent of all tobacco goods. The Yenidze was the largest manufacturing facility for cigarettes in Germany.

The dome with a height of 20 metres, has the form of a four-centred arch that allegedly corresponds to the appearance of the caliph tombs in Cairo. It is colourfully vitrified and illuminated at nighttime. To do so, during the night, two steam machines produce the electricity for the installed arc lamps. Salem Aleikum  May Peace be with you  that used to be, until the war, the salutation line in fluorescent letters from the roof. The dome was destroyed during an air raid in February 1945. In 1966, the dome had been vitrified in brown-green, whilst the colourful vitrification resulted from the reconstruction in the 1980s.

Our rooms in the Yenidze 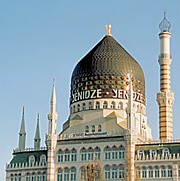 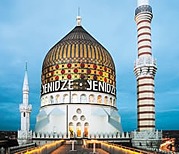 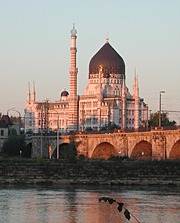 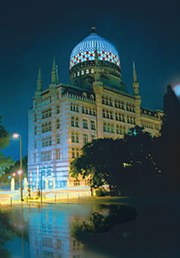