Dresden at the Elbe River

Before its destruction in 1945, Dresden was one of Europes most beautiful cities and one of the most versatile and rich cultural centres. The emphasis was on the domain of architecture and fine arts as well as music, theatre and dance. An evidence of human creation, grown and prospering over centuries, was destroyed irrecoverably in only a few nights of bombing.

For the city's future, there were different ideas from new construction at a different location to reconstruction of the city at the given location. The antipoles surfaced in historic reconstruction and complete makeover. Finally, Dresden settled for a compromise of the two and, despite the mistakes made, there were a lot of opportunities and remarkable successes. The outline remained mostly unchanged. Valuable historic buildings could be saved and rebuilt. Especially when looking across the Elbe river from the Neustadt, the connection between historic monuments and new buildings reflects Dresden's unmistakable face.

Dresden is one of Europe's most distinctive baroque cities. Because of that, the value of the city for other eras, such as renaissance and classicism, was pushed away. In the first half of the 18th century, Dresden becomes the centre of European baroque art. This superposed the renaissance which came to an end by the middle oft he 17th century, whilst the baroque prevails after the Thirty Years' War.

In 2006, there was Dresdens 800th anniversary. Many scars of the destruction and the partly misdirected reconstruction have been removed. Therefore, Dresden was able to retake a place amongst Europes most famous cities of art.

The reign of king Albert (1873-1902) came to an end at the beginning of the century. He was succeeded by his brother Georg (1902-1904) who was, until 1918, succeeded by his son Frederick Augustus (deceased in 1932). Frederick Augustus III was the last Saxon king. The residence city does not exist anymore. However, the newly formed Free State and its capital Dresden follow the traditions. The royal institutions were renamed as state-run institutions.

The cultural events are closely tied to the city's political, economic and scientific development. However, Dresden is not only baroque. Theart nouveau represents the beginning of the 20th century. This era penetrated with neo-baroque style forums and baroque style quotations. The cityscape has been shaped by new constructions, such as the Ständehaus that the Brühlsche Terrasse, the new City Hall at the ring or the theatre. The festival theatre in Hellerau, built by Tessenow, can be named one of the representatives of modern architecture.

In 1912, seemingly in exact contrary to the architectural avantgarde, the cigarettes manufacturing facility "Yenidze". It appears an oriental mosque but the functional composition was downright modern.

The virtue of the artists' association "Die Brücke" (the bridge) has an impact of European dimension on Dresden's expressionism . The Dresden Asso (association of revolutionary fine artists of Germany) forms, besides Berlin, an essential centre of sociocritical art.

Dresden posesses of significant importance in the areas of music, theatre and dance. The Dresden Kreuzchor enjoys a worldwide reputation. In 1923/24, the Gewerbehausorchester became the Philharmonie (philharmonic orchestra).

The citizens of Dresden love sandstone and do not have a lot of affection for extravagant buildings. However, there are exceptions. 100 years ago, the Yenidze, a mosque-shaped cigarette manufacturing facility, was one of them. Masterstrokes of civil engineering are the Elbe bridge Blaues Wunder and the Erlwein storehouse named after the city master builder Erlwein. This storehouse was Europe's first self-supporting ferroconcrete construction.

Today, amongst these are: The St. Benno grammar school, designed by Günter Behnisch, the Crystal Palace, a movie theatre, built by Coop Himmelblau and the synagogue. The latter has been awards with the World Architecture Award 2001 for best new building in Europe and with the critics prize for architecture from theDeutsche Kritiker e.V. (association of German critics). The hall of the central station has been newly roofed according to the plans of the English star architect Norman Foster.

More information on Dresden can be obtained at www.dresden-tourismus.de

Büro- und Marketingservice
in the city 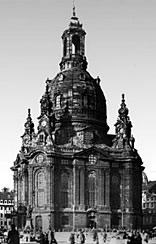 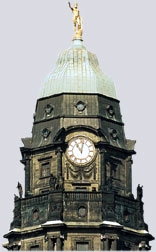 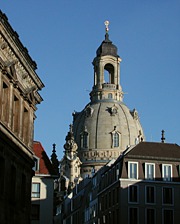 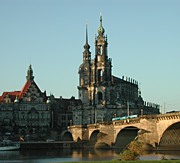 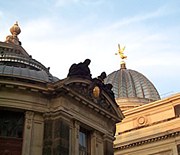 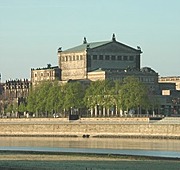 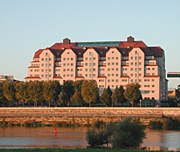