Leipzigs history  background of the city

When travelling back into Leipzig's history, from the 7th century, Sorbian land use patterns can be found in today's metropolitan area at the confluence of the rivers White Elster, Parthe and Pleiße. The name Leipzig could so have been derived from the Slavic word "Lipa" which stands for linden tree.

About 300 years later, German seigneurs arrived in the course of the East expansion and erected their castles. As a result, one of the 30 districts of margraviate of Meißen emerged. In 1165, Margrave Otto from Meißen assigned Leipzig town ordinances and privileges. Before 1200, the construction of the ramparts around the Southern part of the city began. During the following centuries, the ramparts have been equipped with towers, bastions, kennel and moat and encircle the entire city.

In 1497, Leipzig was assigned the imperial exhibition privilege and advanced to one of the most important emporiums in the area of central Germany. Within a radius of 122km, any goods had to be first offered in Leipzig. This affected other cities, such as Dresden, Erfurt or Magdeburg, being, almost entirely, withdrawn from trade.

As a result, Leipzig experienced a money inflow which led to investments in large-scale constructions, such as the new City Hall and the first Gewandhaus (concert hall) in the Gewand alleyway (today location of the Städtisches Kaufhaus). The latter offered nonresident drapery weavers the possibility to rent show rooms. Moreover, the city council fostered, for reasons of fire safety, the reconstruction of half-timbered buildings with thatched roofs into solid brick buildings.

"Leipzig does not remind its visitors of the days gone by. Its buildings reflect a new productive era of business, accomplishments, prosperity and wealth.", Goethe summed up at the end of the of the 18th century about the city that now prospered because of the trade fair and was home to 30,000 inhabitants.

The industrialisation at the end of the 19th century led to a change in the form of the trade fairs; a transition from a commodity fair to a sample fair. This change resulted in the construction of the trade fair palace in the city centre. Today, the Städtisches Kaufhaus represents, as a sample, one of the first rebuilt exhibition centres. The change of the trading courts into this complex type of construction crowned in the transformation of the inner courtyard into systems of passages.

As a result, the old part of the city became one of the first sample fair centres and Leipzig thus assumed the leading position in world trade. In autumn 1918, the city became host of a technical fair, which, two years later, moved to an at-grade exhibition centre, close to the battle of the nations monument.

Leipzigs evolution to an industrial location

At the beginning of the 19th century, the scheduled city enlargement began. It first started in the east with the extension of the bookselling trade and publishing. In 1890, besides various annexations, the village of Plagwitz, located in the west of Leipzig, became a new borough.

Therefore, as an element contributing to the future development of the industrial location, Carl Erdmann Heine began with the extension of the Elster-Saale Canal. This project was only finished in the 1930s. The harbour's fallow storage silos bear witness to these unrealised ambitions. Between 1871 and 1914, the number of inhabitants rose, by immigration and further annexations, from 100,000 to 625,000. This resulted in extensive and even exclusive residential areas but, most of all, in housing shortage. Therefore, Herrmann Julius Meyer, the owner of Germany's most important publishing house, founded the "Cooperative Building Association" (Verein zur Beschaffung billigen Wohnraums in Leipzig) and built blocks of flats (Meyer's tenements) that still exist to this day. These tenements mostly contained a garden parcel in the courtyard.

The Wilhelminian area contributed to the formation of the face of the city and is reflected in many buildings of that time, such as schools, banks, hospitals, museums, theatres, society houses, universities and kitchen facilities.

About one quarter of Leipzig's historic structure fell victim to the Second World War. Moreover, the socialistic reconstruction during the following 40 years left its marks.

In 1989, the people expressed its dissatisfaction with the government by demonstrations, and in Leipzig originated the historic Monday demonstrations at the city ring road.

Since the reunification of Germany, Leipzig undergoes a vivid development process. However, what started as "Leipzig is coming", accompanied by a seemingly incessant building boom, has now diminished. Nonetheless, it is still noticeable in many corners of the city and more recently called "Freedom of Leipzig"...

Leipzig is, with its 506,000 inhabitants (as of November 2006), slightly bigger than Dresden and the most populous city of the New Laender. It is centre of the megalopolis Leipzig-Halle and thus part of the metropolis in the Saxon triangle. The city is an important junction and forms one of the economically most powerful areas of the New Laender.

More information on Leipzig can be obtained at www.leipzig.de.

We would like to thank Mr Andreas Schmidt of the Leipzig Tourist Service e.V. for the delivery of the pictures.

Büro- und Marketingservice
in the center of the city 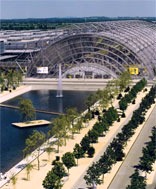 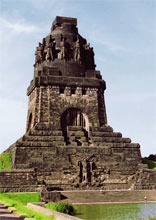